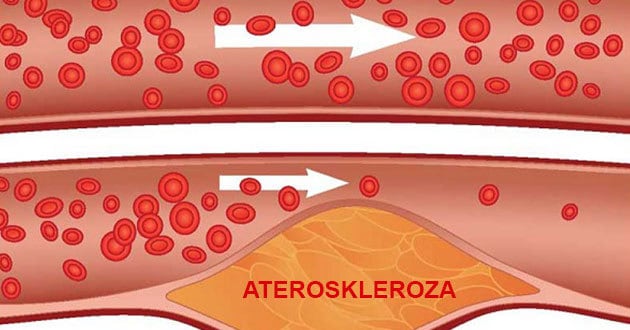 Atheromatosis, artheriosclerosis are the main reason why internist, cardio and vascular specialist are very occupied. With many medical researches in the last decades it has been proved that certain life habits, as well as certain diseases can significantly contribute to development of cardiovascular damages.

Atherosclerosis is defined usually as:

“Atherosclerosis refers to the buildup of fats, cholesterol and other substances inside and on your artery walls (plaque), which can restrict blood flow.”

In atherosclerosis it is visible even with the naked eye, bulge in form of a sack of different sizes that are yellowish in color because of the different fat and cholesterol. These changes in the beginning take only the inner layer of the blood vessel (tunica intima), but with time they are dilated on the middle part of the wall that in medicine is called media (tunica media). As disease progresses there are artery hardening, so the arteries become hard and rigid – non elastic.

Where atherosclerosis is most common?

Atherosclerosis can be general or localized on specific artery areas.  In first place we speak about heart, brain, kidney arteries as well as the aorta. Then there are atherosclerotic changes on the artery of the extremities, especially distant ones, which is very often in the patients that have diabetes.

Diabetic patients are the best example that shows the consequences that are caused by interruption or blockage of blood flow trough the artery. Then gangrene occurs, usually with fingers or foot.

Hypercaloric food – great number of scientific literature, as well as years long follow up of the patients and whole world population points that hypercaloric food that is rich is animal fats and carobohydrates brings to atherosclerosis.  Food that is poor in vitamins, minerals and amino acids and essential fatty acids are the worst choice.

Obesity- by itself does not have to mean atherosclerosis. Nevertheless, obesity is often accompanied with arterial , diabetes, weak physical activity which can be trigger for development  of different cardio vascular diseases, and thus atherosclerosis.

Diabetes-  it is definitely very important risk factor for development of atherosclerosis, under influence of specific metabolic factors that leads to changes on arteries of many organs.

Cigarettes  – Tobacco smoke causes spasms of blood vessels which can cause development of atherosclerosis.

Stressful situations – influence of stressful situations on development of coronary diseases is much bigger then it is in practice. All big and sudden life changes, as well as constant exposure to stress influence not only on nerve system, but also on cardio- vascular and endocrine, which can bring negative consequences on general health.

You can schedule the appointment in the Atlas General Hospital calling this number: +381 11 785 88 88, so you can determine your risk for atherosclerosis. This is one of the diseases where prevention is better than cure.