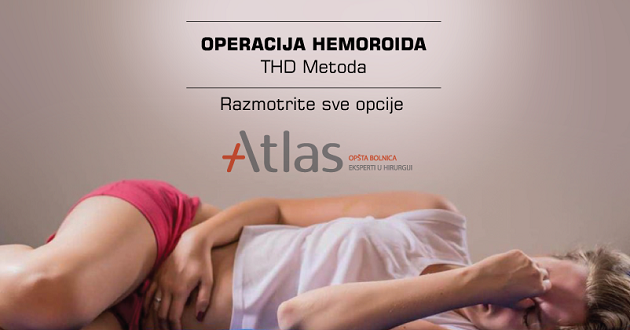 Hemorrhoid surgery – with the modern THD method, will be performed at a promotional price of 135,000 RSD only in Atlas Hospital.

It is known that through history Aristotle cured hemorrhoids, however it is considered one of modern diseases. Hemorrhoids are anatomical part of the colon. Problem starts at the moment when they begin to enlarge.  In the enlarged hemorrhoidal veins it is jeopardized blood flow, swelling occurs  of the surrounding tissue, and in case there is inflammation, they can be very painful. Hemorrhoids are enlarged, swollen and inflamed veins in the last part of the colon-anus and rectum. Hemorrhoids can be localized in the rectum (internal hemorrhoids) or they can develop on the skin around anus (external hemorrhoids).

Retention of the blood and swelling of hemorrhoidal veins develops mostly due to increased pressure in region of rectum and anus. Reasons for this can be different:

Comparing to younger population, older persons more often have hemorrhoid issues. The reason for this is decreased elasticity of blood vessels in later years of life. However, although hemorrhoids are far more often seen in elderly people, it is not rare case to see them in younger persons and even in children.

Treatment of hemorrhoids with THD method 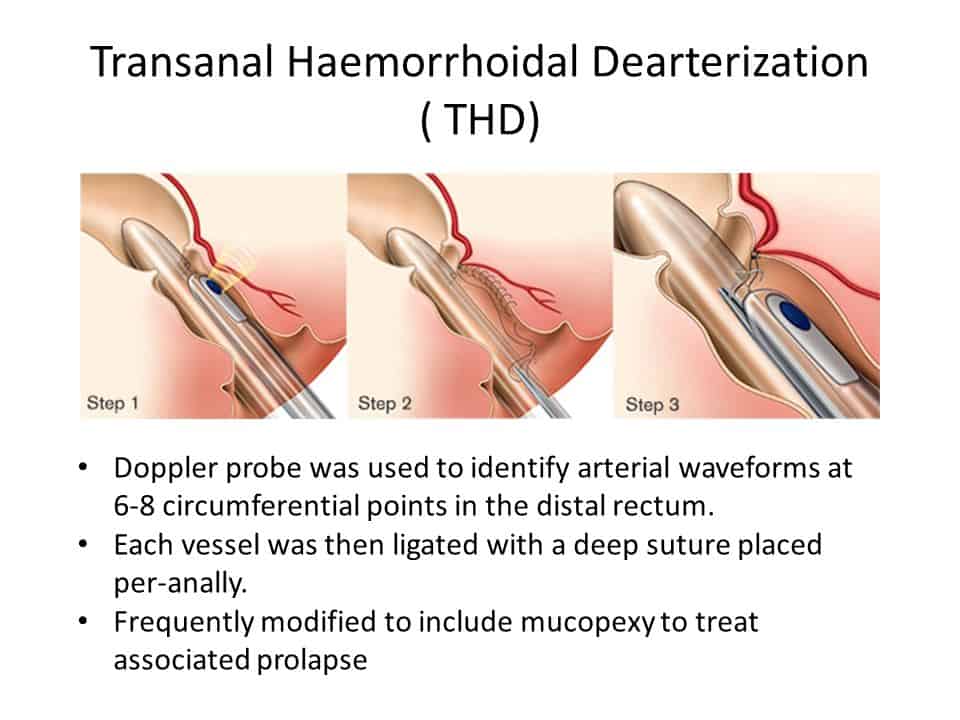 This procedure is the least invasive regarding the other surgical methods and is followed by minimally risk of creating  pain and stress for a patient. THD procedure is performed like one day surgery  and patient can go home the same day or the next day, and for return to normal life activities it is necessary 5-6 days. For THD method it can be said that is permanent solution in treatment of hemorrhoids, because hemorrhoids rarely occur again.

Operation of hemorrhoids with THD method

After the examination and diagnosis of hemorrhoids, and preparation for THD method operation, the intervention is performed. There is special designed anoscope with cold light and implanted  doppler probe that is connected with the THD apparatus. Using doppler, surgeon searches for hemorrhoid artery that fills the shunt and locates it. One detected with special system of guides, artery is detected and on the entrance to the shunt is tied and thus etiologically problem is solved.  6 arteries are those that should be found. When surgeon closes all shunts, problem is solved, usually for good.

How the THD procedure is performed?

THD surgery is performed by the colorectal surgeon. The method requires the use of special equipment that allows great accuracy and certainty in determining the regions where intervention is to be performed. During THD surgery, the arterial blood vessels that supply hemorrhoids are accurately located with the help of a fine, specially designed proctoscope. The maximum precision possible is made by the use of an ultrasonic probe with a Doppler effect. The located arteries are then ligated, and if there is a mucosal prolapse of the end of the colon, the prolapsed mucosa is raised, returned to the end of the colon and stitched. As the operation is performed above the jagged line (there are no sensory nerves above the jagged line) you will not feel pain.

An anoscope with a Doppler probe is inserted into the rectum.

The Doppler probe marks the place to be attached (on the anoscope there is a guide with a needle and a needle holder beside the Doppler). The signal that the Doppler sends opens the space on the anoscope through which the ligation of the dysfunctional arteriovenous branch is lined. This operation gives absolute precision and eliminates the possibility of any error. The operation is performed in stages (looking at the clock, zones 3, 5, 7, 9, 11 and 1 are lined up).

After all six regions have been processed, the previously visible hemorrhoid nodes disappear, since there are no longer prerequisites for their uncontrolled blood filling. The seventh stage is the placement of a sponge swab that dissolves over a period of 12-24 hours. The purpose of this tampon is to exert pressure on the stiches that are placed so that some of them , during changing of position, after the procedure, will not loosen.