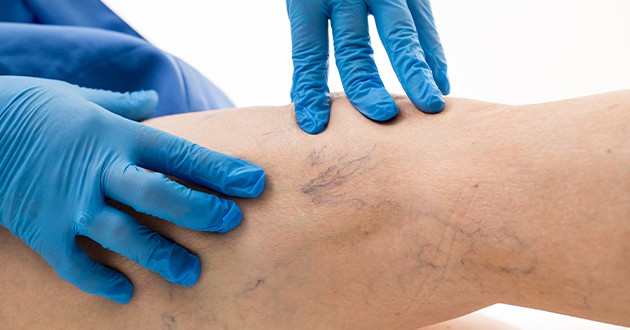 The venous system of the legs consists of superficial and deep veins. Deep veins are invisible because they are located in the muscles themselves. An important role in the functioning of the veins is played by the venous valves (small barriers) that maintain the flow of blood in the legs against gravity. If the valves are damaged, blood begins to stay in the lower parts of the veins, which begin to expand. When the circulation is thus difficult, the possibility of inflammation of the veins and the appearance of a thrombus is created.

Varicose veins are a big aesthetic problem, but medical complications also occur. Thrombosis, thrombophlebitis, consequent pulmonary embolism and venous ulcer occur. That is why they need to be treated on time.

Factors that affect the formation of varicose veins are:

It is performed with the use of local anesthesia, in combination with very mild analgesic sedation. The patient can return home the same day, after the intervention, or spend a day in the hospital, just in case. Recovery at home takes 7-10 days. Immediately after the operation, compression bandages are put on, an elastic sock on the second day, which is worn until the end of the recovery period. After that, the patient returns to his usual activities, with as much walking as possible.

Stripping of varicose veins lasts from one to two hours and is one of the easier surgical procedures. It is performed in epidural or spinal, and if necessary, general anesthesia. It is recommended for patients in whom other types of treatment have not given effect. And in cases where the first signs of acute complications, chronic venous stasis or vital complications (pulmonary embolism) have appeared. The operation can remove diseased parts of the venous system (main veins) or parts of the superficial venous system.

It is usually done by tying the ostium of the main veins in the inguinal part or behind the knee, after which the vein is pulled out with the help of a catheter that is placed. Surgery on both legs at the same time is avoided. The patient usually stays in the hospital for two days, while recovery at home takes about three to four weeks. Immediately after the operation, compression bandages are put on, an elastic sock on the second day, which is worn until the end of the recovery period. After that, the patient returns to his usual activities.

Nobody likes to have surgery, but when we have to, we all like to have as little pain as possible during the operation and after that. Usually then we ask if he can do “something laser” – thinking of minimally invasive procedures. New technologies in medicine have brought us the opportunity to treat many diseases surgically in a less invasive way than before. It is still far more invasive than what we would like, although realistically, the minimum invasive surgery is really less invasive today. Atlas General Hospital has the most modern medical devices, three fully equipped multidisciplinary rooms in which vascular surgery specialists successfully perform vascular surgical procedures.

The venous system of the lower extremities has two parts – superficial and deep. In healthy people, superficial and deep venous valves allow venous blood to flow to the heart. In the case of varicose veins, the valves can no longer perform their function (they are permeable in both directions), so the blood from the deep veins returns to the superficial ones, increasing the pressure in them, which spreads all the way to the feet. Varicose veins spoil the aesthetic appearance; they can also be the cause of pain, night cramps, feeling of heaviness in the legs, and even serious complications such as the creation of open wounds on the legs, thrombosis, and dangerous lung embolism. Diseased superficial veins must be removed because veins that are healthy and flowing completely take over the role of removed veins. After the removal of superficial diseased veins, the remaining ones perform their function even easier because the superficial ones “do not interfere” with it.

When we talk about varicose veins, we mainly mean the superficial system when it consists of two main veins (a large saphenous vein that extends on the inside of the entire leg and a small saphenous vein that is located on the back of the lower leg). Both of these main veins have their tributaries – numerous veins that are most often seen in varicose veins. The disease of varicose veins can only include tributaries, but it is very often noticed that the main tree is also weakened. The only definitive way of treatment is the removal of those veins that are diagnosed as weak spot on ultrasonographic examination. And while the main tree of the saphenous vein can be removed by so-called stripping, radiofrequency or laser ablation, venous tributaries usually have to be removed through (smaller or larger) surgical incisions.

Varicose vein surgery solves a leg problem that can be a significant health and aesthetic problem for decades.

Striping means that through two incisions (inguinal and above the ankle) a large saphenous vein is opened and through it a wire is placed by which it is pulled out completely and thus completely removed. This method can be done under general or some kind of regional anesthesia (spinal or epidural) and the biggest deficiency of the method is the need for a groin incision and the trauma that is inflicted by pulling out the entire vein. Stripping takes about 1-2 hours. Striping has long been the only method used, but then came the idea that superficial veins do not have to be removed but that it is enough to somehow exclude them from the circulation. If blood does not flow through them then it is as if they are not there. After stitches, special bandages are put on and a compression sock over it.

Stripping veins surgery is done in the following cases:

Unlike stripping, they are performed under conditions of local anesthesia, and the main stem of the great saphenous vein is not removed, but it is excluded from the circulation with the help of laser or radio frequency energy. Both methods are based on a similar principle. A special catheter is inserted into the vein through the main stem of the superficial vein at the level of the knee, and under the control of ultrasound, this catheter is brought to the groin where the main superficial vein ends and flows into the deep venous system. At that point, energy (laser or radiofrequency) is released through the catheter, which causes the walls of this vein to stick to each other and this vein to collapse. Once the walls of this vein stick together, they remain so glued, and therefore there is no more flow through this vein. The catheter is then pulled back and the entire patellar vein is disconnected from the circulation. You can see the animation showing the schematic procedure at the following link.

In relation to laser ablation, they are in less postoperative pain, since the aggressiveness of laser energy is higher, which is why there is a greater possibility of damage to the vein wall. On the other hand, radiofrequency ablation is not as effective if there is fresh thrombosis in the venous system.

Common to all three methods is that after the great saphenous vein is excluded from the circulation, its lateral tributaries remain, which must also be removed for both functional and aesthetic reasons. Small surgical incisions are most often used, but it is also possible to use some of the sclerosing treatment device.

When is varicose vein surgery recommended?

The intervention is undertaken when preventive measures – drugs and other types of therapy, do not give results, and there are indications that complications may follow. With already formed thrombosis, surgical treatment is possible only in the first few hours and chronic therapy lasts for months, and often years.

The optimal way to prevent thrombosis and all possible consequences of its occurrence are: weight reduction, avoiding long sitting and standing, walking, taking larger amounts of fluids and timely surgical treatment of varicose veins.

Treatment of varicose veins in Atlas General Hospital means prevention of thrombosis, and in the case of verified DVT or thrombophlebitis, prevention of the formation of a new thrombus on the already existing one.

Look for additional information in the field: Vein surgery

Experts in the field: General surgery

Specialist in general and vascular surgery