Gallstones are solid, stone-like lumps that form inside the gallbladder.

What stones are in the gallbladder?

Gallstones can be very small, or the size of the gallbladder itself. It is generally less than 2.5 cm. Gallstones in 85% of cases consist of cholesterol, and in a smaller number of cases they can also be pigmented stones. The type of gallstones is very important because cholesterol stones will most likely respond to non-surgical treatment compared to pigment ones.

In other cases, gallstones cause pain and must be treated: removal of either stones or gallbladder.

In most cases, when there is no inflammation, gallstones do not give any symptoms, and when symptoms do occur, they are most often in the form of lumbar pain below the right costal arch with spreading to the back often a few hours after a heavy or fatty meal, nausea, vomiting and fever.

People who have gallstones can also have them in the bile ducts, and this condition is called choledocholithiasis.

Where is Gallbladder located?

What does the gallbladder do?

The main purpose of the gallbladder is to concentrate and collect bile, a greenish-brown fluid produced by the liver. Bile is needed for digestion and absorption of fatty foods, as well as for the absorption of fat-soluble vitamins.

Painless gallstones – Most people who have gallstones show no symptoms; their stones remain “quiet.” Silent gallstones are often detected by ultrasound or a CT scan taken for other reasons. Silent stones do not need to be treated, and the first symptoms of gallstones are usually mild.

2.Pain below the right costal arch

Bile Colic – Bile colic, also known as bile pain or biliary pain, is the most common symptom of gallstone disease. They are characterized by attacks of abdominal pain, often located below the upper abdomen, just below the ribs. You may also experience back pain in your right shoulder, nausea and vomiting. Bile colic is usually caused by the contraction of the gallbladder after a fatty meal. These contractions put pressure on the stones, which block the opening. The pain passes with the relaxation of the gallbladder after a few hours.

After the first attack of pain due to biliary colic, there is a high chance that you will have more severe symptoms in the future.

3.Lumbar abdominal pain with spreading to the back

4.Pain in the middle or right upper abdomen

8.Jaundice (yellowing of the skin and eyes)

Acute cholecystitis is a serious condition that requires immediate medical attention and hospital treatment. Treatment includes intravenous fluids, painkillers and, sometimes, antibiotics. Surgical removal of the gallbladder is recommended during or shortly after hospitalization. If left untreated, acute cholecystitis can lead to gallbladder rupture, a life-threatening condition.

Complications can occur if the stone in the bile moves and blocks the part where the bile comes out (a condition called choledocholithiasis).

Acute cholangitis is an infection of the bile ducts that causes pain, shivering and fever. Immediate treatment is necessary and usually means the removal of gallstones by a non-surgical method known as endoscopic retrograde cholangiopancreatography- ERCP.

Acute pancreatitis is a sudden inflammation of the pancreas, associated with severe abdominal pain.

How to diagnose gallstones

Surgical removal of the gallbladder (cholecystectomy):

At the Atlas General Hospital within the Center for General Surgery, a team of doctors performs laparoscopic gallbladder surgery (cholecystectomy) at a promotional price.

The cost of gallbladder surgery is 124,000 rsd and there are no hidden costs. The price includes all costs: surgical preparation, surgery and hospital day. 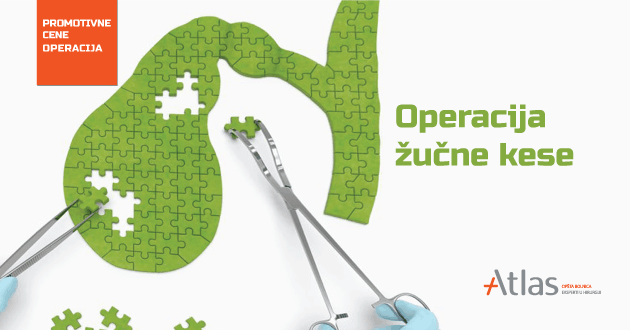 Is it possible to live without a gallbladder?

You can live without a gallbladder. By removing the gallbladder, complications such as perforation are prevented, when it ruptures and all the contents from it are poured into the inside of the abdominal cavity, which leads to an acute abdomen, which is an urgent condition.

There is also the possibility of clogging the pancreatic duct with stones and thus leading to acute pancreatitis (then pancreatic enzymes cannot be secreted into the intestines to aid digestion, but act on the pancreas itself leading to inflammation which is another emergency).

Both of these conditions are life-threatening, so gallbladder diseases should be taken seriously and its treatment should not be neglected.