Dr. Nemanja Zaric: “Hemorrhoids are swollen blood vessels which have an important functional role in the fine stool regulation. When it comes to hemorrhoids, then we are talking about a hemorrhoidal disease that must be treated, either conservatively with drugs or surgically. ” Dr. Nemanja Zaric is a specialist in general surgery and performs hemorrhoid surgeries at the Atlas Hospital using the THD method.

Who gets hemorrhoids most often?

Hemorrhoids are divided into external and internal. Only the internal ones are treated surgically.

The main symptom that something is wrong with them is bleeding.

Dr. Nemanja Zaric: ” There are four grades of hemorrhoids, when we talk about internal hemorrhoids and those in an advanced stage, when there can be prolapse, or as they say, the bulge of hemorrhoids. If the hemorrhoids become prolapsed and get stuck, then they can hurt. So, what is important is that when you notice blood on toilet paper, which is the most common symptom, you should immediately consult a doctor because that blood does not have to be just from hemorrhoids, it could be from some more serious conditions and diseases, so it should not be neglected and postponed. ”

If you see bright red blood, then it is due to hemorrhoids, because it is venous blood. If you react to the appearance of the first symptoms and consult a doctor immediately, the therapy is simple and in most cases the problems can be solved without surgery. 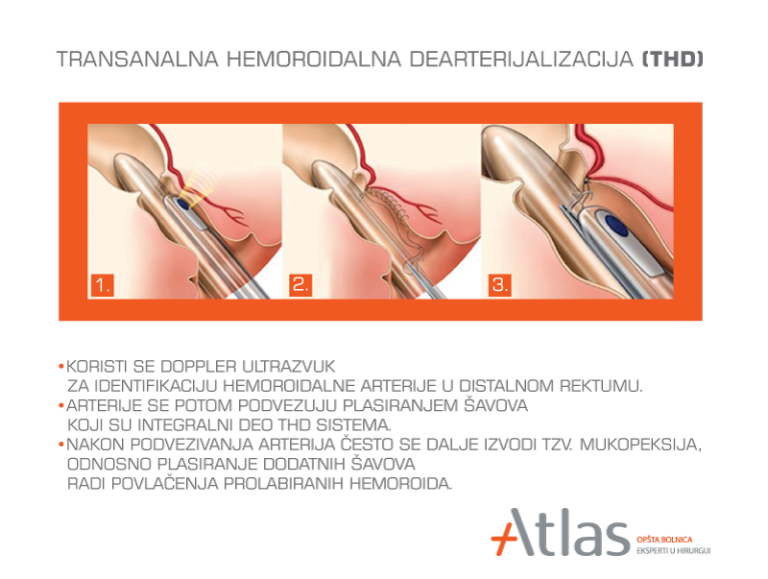 The difference between classical surgery and THD method

Dr. Nemanja Zaric: ” Depending on the grade, hemorrhoids can be treated conservatively or surgically. Conservatively, by local application of various creams and ointments that are applied, as well as by taking some medications that should make them shrink, so to speak. Let’s not forget, hemorrhoids are veins and nothing else.

When that does not give results or when the disease has already progressed, then we have several different options for surgical treatment. The classic operation for hemorrhoids involves hemorrhoidal artery ligation by cutting off the diseased hemorrhoid. It is a classic method that has been used for decades, maybe even longer. Now there are new methods of treating hemorrhoids that are used in the world, and in our country at the Atlas General Hospital. This is the THD method. The THD method does not cut the hemorrhoids, but does something called hemorrhoidal artery ligation. The THD treatment method is accepted as the standard treatment for hemorrhoids at Atlas General Hospital. ”

Dr. Nemanja Zaric: ” The essential difference is in what I mentioned a little while ago, there are no hemorrhoid cuts. Therefore, there are no vulnerable surfaces that in the post-operative course could be a source of problems or complications for the patient in terms of pain, above all, and long-term recovery. The THD method is used to tying “up” an artery, which delivers blood to a certain hemorrhoid. In case of the hemorrhoids of grade three or grade four even, then something called mucopexy is done- the hemorrhoid itself is sutured and returned to the place where it should be. ”

Dr. Nemanja Zaric: ” Hemorrhoids can reoccur because there are different anatomical variations. Maybe someone has eight such arteries. If such a situation occurs later in life, it does not require additional surgical intervention, but can be resolved conservatively. ”

Dr. Nemanja Zaric: ” I was trained in Rome, with Professor Ratto. He is an absolute authority on THD hemorrhoid surgery and has some 2,000 surgeries behind him. ”

What does THD mean?

The patient had internal hemorrhoids and came to see the doctor. We are interested in how it is determined whether you will operate it in the classic way or by the THD method. 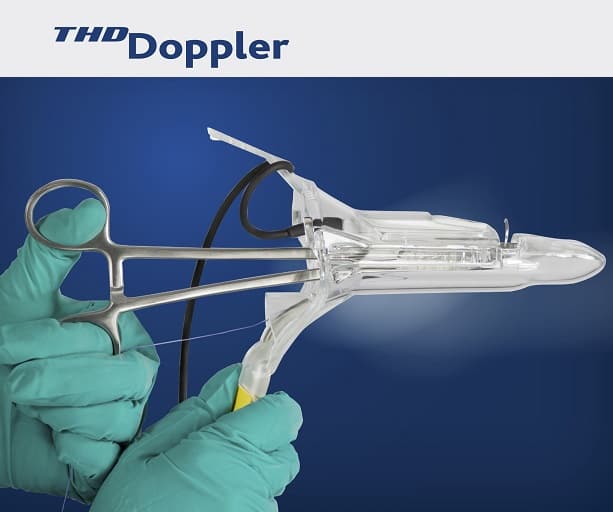 THD method is already standard in Atlas General Hospital. A large number of patients had already had this type of surgery. They recovered quickly and forgot about the problems that had been very unpleasant.

Dr. Nemanja Zaric: ” Now we are operating a 36-year-old patient, who came because of hemorrhoid issues, due to bleeding, above all.” At the examination, we found that he had hemorrhoids of grade three, so we decided in agreement with the patient to do the THD procedure for him today.

The procedure will take about half an hour. The patient will be under general anesthesia and will be able to go home during the day. More precisely, in a few hours, when we see that everything went well, that there is no bleeding as some possible first post-operative complication, then we will let him go home. The patient will arrive at the first check-up in 14 days. The second control is in about a month and that is standard. Of course, if there are some possible complications that are always possible, we will see each other earlier, but normally the patient comes after 14 days for the first check-up. And it takes 6 to 8 weeks for the hemorrhoids to completely disappear. After eight weeks, we say that the problem is completely solved.

You can see the whole article by clicking on the link HERE.

Although this method is practiced in several institutions in Serbia, patients find out about it only when they come for an examination. When doctors confirm that the THD method can be used in a specific case, patients usually opt for it, because it provides them with a very quick solution for hemorrhoid issues, and after the intervention, they are completely cured.

The price of THD hemorrhoid surgery at Atlas General Hospital is 135,000 dinars and all costs are included in this price.