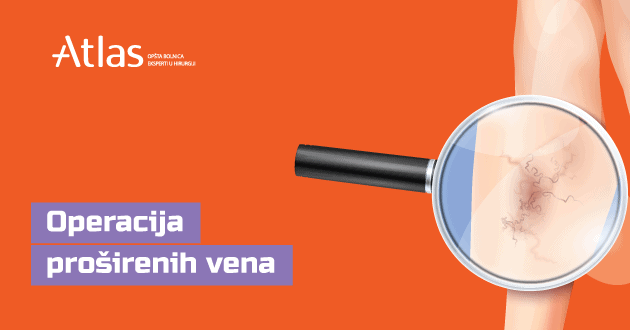 There are many persons that in summer time have problems with legs that become “heavy and tired”. The reason for this problem to occur in the summer time is heat that makes blood difficult to circulate in veins, leads to inflammation and leg swelling. Persons with this problem usually feel tired and sluggish, and aesthetic problem is not less important. In summer time when people wear summer cloths, varicose veins become more visible. Many of them will try to resolve this problem with medications,  leg compression wraps, elastic socks and different health aids. The only right solution in large number of cases is surgery. Vascular surgeons from Atlas General Hospital will explain us different problems of varicose veins:

What are varicose veins?

Varicose veins are diagnosed when possibility is lost for blood to flow from legs towards heart. Vein valves play an important role in vein functioning  (small barriers) that keep blood flow in legs opposite to gravity.  If valves are damaged, blood begins to stagnate in upper parts of veins that begin to widen. Thus circulation is more difficult,  possibility for inflammation of veins and thrombosis occurs.

Patient with varicose veins have problems with heavy legs, pains that are more present during long standing and sitting, swelling of legs and joints, tiredness, sense of tension, burning, tingling, itch, restlessness in legs, as well as occurrence of  hard and painful knots on legs (thrombosis of superficial varicose veins).

This health problem has more than half women and around twenty percent of men. It is considered that genetics plays the most important part in varicose vein, and risk factors are also life style of individuals. Pregnancy is time when varicose veins are created most often. Among risks we meet long sitting or standing, being overweight, some hormonal therapies, chronic opstipation and oral contraception. Flat feet in correlation with bad static also influence venous insufficiency. Some think that varicose veins are illness that has become common after evolution of walking upright.

What is the surgical treatment for varicose veins?

Most popular is classical operation that is performed in epidural or spinal anesthesia, and if necessary in general anesthesia. Varicose veins surgery lasts from one hour to two hours and is one of easily performed with only small number of complication. It is advised only to the patients that had no improvement to other treatments. Even in cases when we can observe first signs of acute complications, chronic venous insufficiency or vital complications (pulmonary embolism). Operation can remove part of venous system (magistral vein) or parts of superficial venous system. 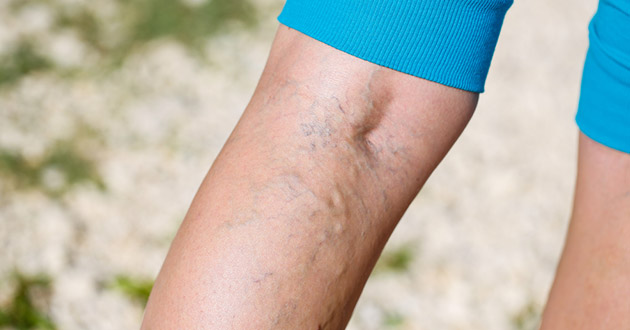 The most common method is the tying of the narrow main veins at the foreskin of the knee or behind the knee. Then a surgical cable is placed around the vein, allowing the vein to be removed. Operation on both legs simultaneously is usually avoided. Patient in hospital usually stays for two days, while recovery in home conditions lasts for 3 to 4 weeks. Immediately after operation compression bandages and elastic socks are worn till the end of the recovery. After that patient returns to ordinary daily activities.

The price of radio frequency ablation is 217,000 dinars

Striping means that through two incisions (inguinal and above the ankle) a large saphenous vein is opened and through it a wire is placed by which it is pulled out completely and thus completely removed. This method can be done under general or some kind of regional anesthesia (spinal or epidural) and the biggest drawback is the need for a groin incision and the trauma that is inflicted by pulling out the entire vein. Stripping takes about 1-2 hours. Striping has long been the only method used, but then came the idea that superficial veins do not have to be removed but that it is enough to somehow exclude them from the circulation. If blood doesn’t flow through them then it’s as if they’re not there. After sewing, special bandages are put on and a compression sock over it.

Stripping is done in the following cases:

The price for striping methods is 182,000 dinars

Unlike stripping, they are performed under conditions of local anesthesia, and the main stem of the great saphenous vein is not removed, but it is excluded from the circulation with the help of laser or radio frequency energy. Both methods are based on a similar principle. A special catheter is used to enter the vein through the main stem of the superficial vein at the level of the knee, and under the control of ultrasound, this catheter is brought to the groin where the main superficial vein ends and flows into the deep venous system. At that point, energy (laser or radiofrequency) is released through the catheter, which causes the walls of this vein to stick to each other and this vein to collapse. Once the walls of this vein become blind, they remain so glued, and thus there is no more flow through this vein. The catheter is then pulled back and the entire popliteal vein is disconnected from the circulation. You can see the animation showing the schematic procedure at the following link.

Advantages of radiofrequency ablation over stripping

are in less postoperative pain since the aggressiveness of the laser energy is higher, which is why there is a greater possibility of damage to the vein wall. On the other hand, radiofrequency ablation is not as effective if there is fresh thrombosis in the venous system.

Common to all three methods is that after the main saphenous vein is excluded from the circulation, its lateral tributaries remain, which must also be removed for both functional and aesthetic reasons. Small surgical incisions are most often used, but it is also possible to use some of the sclerosing devices.

Trust only the best

Atlas General Hospital  provides supreme services in modern diagnostic and surgery in pleasant ambient with cutting edge equipment in center of Belgrade. It is not necessary to be in hospital waiting lists and put in danger your health further. In Atlas General Hospital in one day you can do all necessary diagnostic and make an agreement for certain surgical procedure. Expert team of our hospital has prepared all the necessary information so that treatment  from admission to the hospital to intervention itself passes as simple as possible.