Prof. Dr. Popkov performed limb lengthening and helped Elma. Elma is 16 years old. She was born in Brčko, Bosnia and Herzegovina. From birth, she has leg deformities, which made it difficult for her to move and with time passing by created an increasing pain. We met her at Atlas Hospital, where the leading orthopedist of the Ilizarov Center in Russia, Professor Dmitry Popkov, manages to solve her big problem in stages. This was an examination at the end of the second phase of the treatment.

Prof. Pokov tell us a bit more about Elma’s case:

“In 2019, we lengthened Elma’s right leg and corrected the severe deformity that was a consequence of her illness. We lengthened it by 10 centimeters. We have completely corrected all deformations. She is a very strong person, who focused all her energy on healing and we did everything we had planned in this second phase of treatment. First, we only corrected the deformations of the left thigh and lower leg. At that time, we did not know how much she was able to withstand complex operations, but now we know that she is completely ready. We have completed the rehabilitation period, we have managed to establish the bending of the right knee and ankle. She can now decide for herself when we will start the next phase of treatment, when we will lengthen the left leg so that both legs are the same.

You can see the results of the treatment on the video. This was on January 2nd last year. When we looked and saw that the lengthened bones had grown properly and then we took off Ilizarov’s apparatus. It was necessary to wear the plaster for a certain time, so that the patient could use her leg without any fear. Also, to start walking in the period from when we removed the device until this examination. In the future, she should do exercise for the knees, ankle, and to strengthen her muscles.

In 4 to 5 weeks, she can go to the spa, walk in the anatomical shoes of different heights that are specially made for her. This is really a very complicated pathology, very complex. It requires a lot of work from surgeons and orthopedists. Elma’s strength and power of will are very important, as well as the support of mom and dad that she has. And in the end, everything will be as it should be. ” 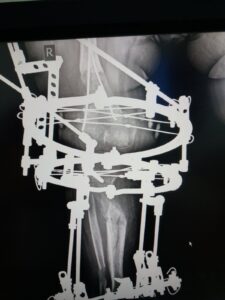 Elma, in the mood to talk and happy that her legs were straightened and that she could walk without pain, told us how long and difficult it was to go to the doctor who could help her.

How long have you been looking for a doctor who can help you?

Elma: “We have been looking for him since birth and most of them were in Tuzla and Belgrade. In Belgrade, we mostly visited Dr. Dučić. But unfortunately he said he was not able to perform the procedure and that the chances of success are 50 to 50. Since he was not certain that he would succeed 100 percent, he recommended Dr. Popkov to us. When we first saw Dr. Popkov, he said he was able to perform the procedure. I was not very satisfied then, because a doctor saw me for the first time and then he said that he could help me and some doctors have been seeing me for 15 years and there was nothing they can do.

I was really scared of it but the day of surgery had come. I was still under that stress, fear, but when the operation was over, we saw that everything went well and more than we expected. I was very pleased, so from now on, whenever I see Dr. Popkov, I know that I am in safe hands and I am not afraid of anything.

That is the trust he was talking about. You are a strong person and you will endure it all. What were your problems?

Elma: “Well, the problems with the bones, the bones were curved and he managed to straight them and now he’s doing lengthening.”

What is it that you precisely feel as an improvement?

Elma: “It’s like nothing happened because everything is great now, I don’t feel like I had that problem, so the doctor did it well.”

Can you walk now?

Just tell us how the doctor operated one leg at a time?

Elma: “Well, at first he only did the correction of the deformity on the left side, he also thought that he would lengthen it as well, but he did not dare, because I had a major surgery for the first time. And when he realized that I had endured that first operation on this right leg, well, he was ready for correction and lengthening. 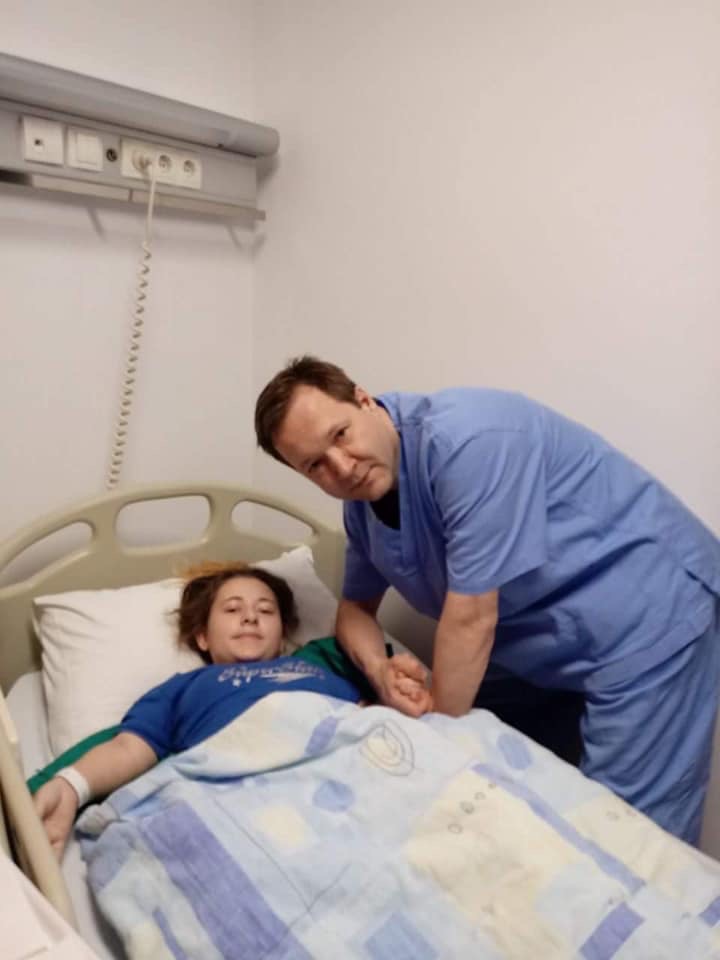 And now you were wearing this Ilizarov apparatus, was it hard?

Are you going to keep wearing Ilizarov now or are you done with him?

Elma: “I have another leg extension operation and then I will wear it the most.”

Are you all right now compared to how it was?

Well, so you’re not afraid of any future interventions?

Elma’s parents, who have never lost hope that they could help their child, remember the years spent searching for help and disappointments.

Father: “For 13-14 years we walked from doctor to doctor. Go there, go here, go to Tuzla, get hormone analyzes, then we came to Belgrade to the Institute for Mother and Child with Professor Radlović, we were doing hormone analyzes again, vitamin D3, and everything was fine. Supposedly genetics, genetics… It’s not all about genetics, so there is salvation somewhere, only a doctor can help. ”

The right doctor was found in the Atlas Hospital in Belgrade. Dad Nusret showed us a picture where you can see how big the problem was with Elma’s legs. They were in the shape of the letter O, and in the case of the left, the deformity was greater because the bone in the axis was completely inverted. After the operation and wearing the apparatus they are corrected now and parent’s happiness is endless. Every inch was important to them.

It was hard to find the right suregeon

Father: ” The lengthening was 10 – 12 centimeters on one operation. Nobody can do that here yet, because it is impossible. So we also went to see Dr. Dučić, he is good, but he was not able to do it, he does not make any guarantee, and doctor normally said that he could do what he could. Go here and there let that doctor look at you and he will tell you everything. When we came, it was in this very office and the first time Dr. Popkov saw her, he said -99.9 percent, I will do it.

We just talked and after 15 days, they told me that we could come for surgery. I said: Wait a minute, I have to pull myself together, is not very easy. In two months, I will come again and agree on the date of the operation. The operation was performed without any problems, Elma recovered quickly. She had some pain for five days, which is normal, but the operation is demanding. The legs are operated and there are extremely small scars. It’s amazing that a man can do so much surgery and such a small scar remains. ”

Salvation for their child was found and it is priceless. 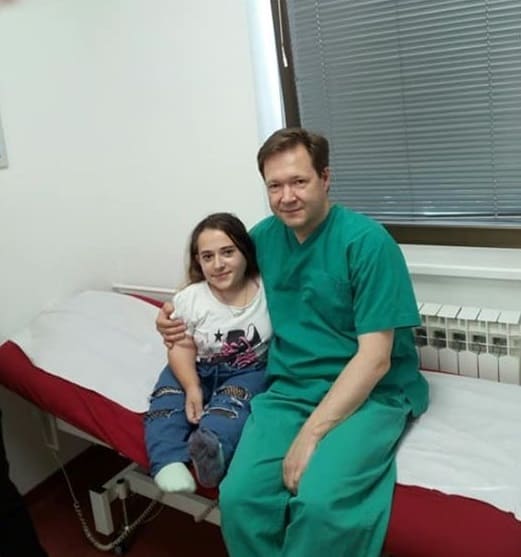 Conversation between father and professor Popkov at the review

Father: “You search for 13-14 years, wherever you go, nothing. Just go there, go here. And when you find salvation, there is nothing more to talk about. There is no one who did not ask me, no one to whom I did not suggest that whoever has a problem like this, I said to come here. The only salvation right now is here. So Dr. Popkov is real, that was what Elma said to doctor wizard.

Dr. Dmitry Popkov comes to Serbia at least four times a year to the Atlas Hospital and the University Hospital in Tiršova.

Prof. Dr. Pokov: “Nothing special happened, everything is as usual. Examinations, helping to the patients, surgeries, talking to colleagues. ”

He stayed in Belgrade for 10 days, he had an average of two surgeries a day in Atlas and Tiršova, and examined 4-5 patients a day.

Prof. Dr. Popkov: “I work in the Atlas together with Serbian experts, which means working together with therapists, pediatricians, radiologists, ultrasound specialists.

Our interlocutor is a professor at the University, a member of the Russian Academy of Medical Sciences, a researcher, but he is here just a specialist.

What interventions do you perform at Atlas General Hospital?

Prof. Dr. Popkov: “Here I am an orthopedic surgeon for reconstructive surgery of the musculoskeletal system. These are deformations, shortenings, bone fragility and everything related to that. This refers to problems in newborns with congenital anomalies, as well as problems that are the consequences of trauma, sprains, and deformities. Of course, I am a specialist in pediatric orthopedics, but together with our colleagues from Atlas, we also treat adult patients.

Here are patients from Serbia, Bosnia and Herzegovina, Austria, and Macedonia, from the territory of Kosovo. They come for an examination from both Croatia and Germany. Everyone comes to Atlas because this is a hospital that has established cooperation with funds and insurance companies of those countries. ”

At the end of the conversation, he told us that his plans do not change, the cooperation with the Atlas Hospital and the Institute in Tiršova continues with the same dynamics and that he is there for all patients from this region.

You can watch the entire article by clicking HERE.